Some time ago, the fate (read a business trip) have brought me again to this wonderful city at the confluence of the Oka and the Volga rivers. Once I already had opportunity to visit Nizhny Novgorod. Unfortunately I had too little time to walk around the city and explore its famous places. This time I was more lucky, as I arrived early in the morning, but the first event was scheduled only for the next day. So I decided not to lose any time and after settling in the hotel to explore the city.

Leaving the train I was inspired by the upcoming adventure, and, as my route should pass through one of the main historical sightseeings of Nizhniy Novgorod – Fair of Nizhny Novgorod and total time should not take more than half an hour, I decided not to take a taxi, but to walk to the hotel. 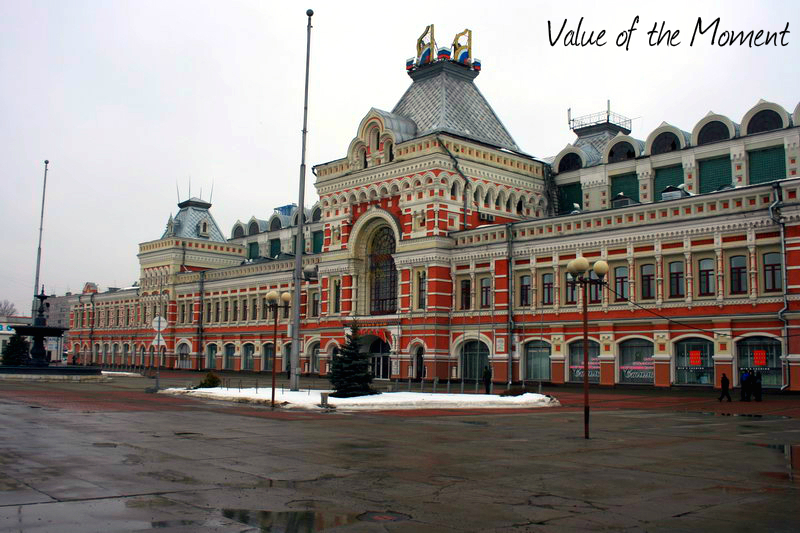 By the way, thanks to this fair, Nizhny Novgorod has got a position of a major trading center of Russia and had the informal name “The Pocket of Russia”. Unfortunately, pretty soon my mood is slightly faded because I discovered that I forgot the memory card for my camera at home… So me, as a blogger, stayed without one of the main tools – the camera. However, I had my smartphone and a GoPro camera (which I just bought and still haven’t tried). With these facts, I got a small hope, that I can get good pictures from Nizhny Novgorod 🙂 On the way to the fair I saw a monument of Vladimir Lenin, which are thousands in Russia. However, this one was different! When viewed from a certain angle, Lenin insistently invites you to stay in Park Hotel 🙂 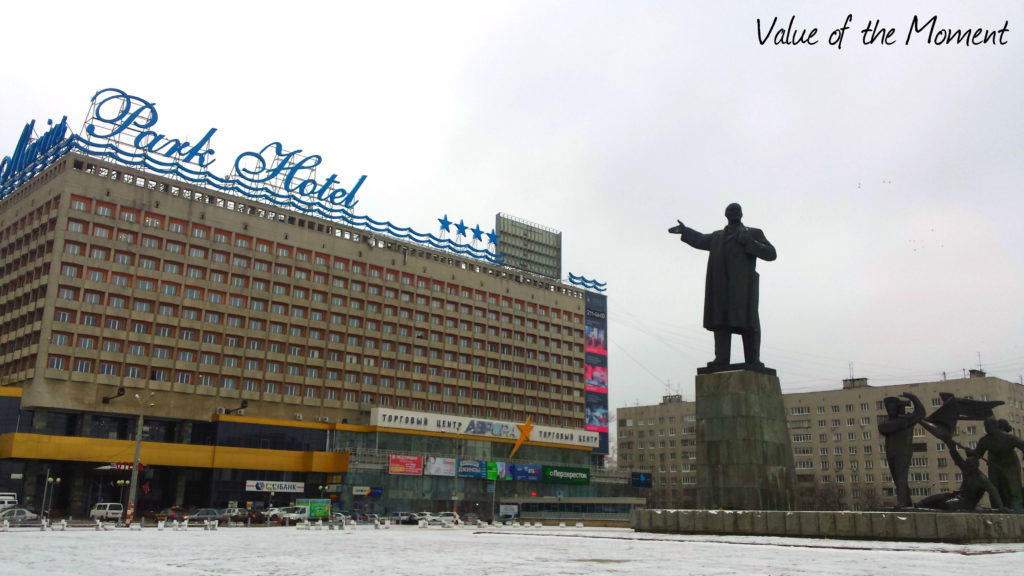 The second disappointment was that I saw that in the fair there was no trading… (what else I expected when it’s winter, and a strong cold wind is blowing from Volga), but the building itself is  very beautiful and deserves of attention. Then my way was to the Alexander Nevsky Cathedral, which I already could see ahead. Of course, The Cathedral itself is very beautiful, but it is fully restored and looks as a new one, and therefore do not cause any awe. As I learned later, the Cathedral was built a long time ago, however, in the Soviet times it was completely looted and partially destroyed and had to be rebuild  almost from zero level. I hope that feeling of awe that I didn’t had coming into this Cathedral, our children will be able to experience later when will visit it in 30-50 years 🙂 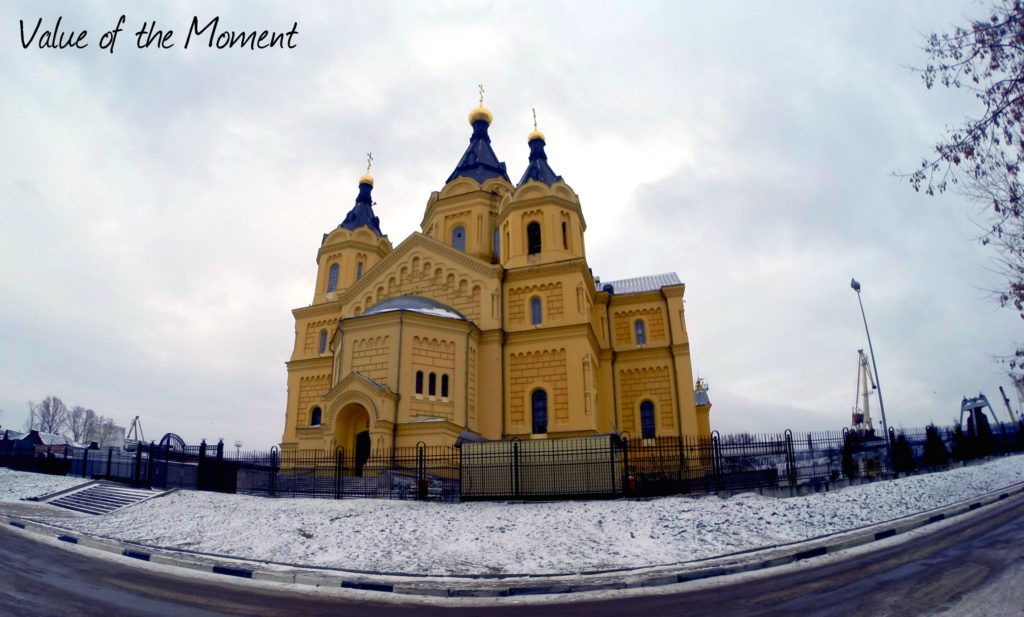 Walking around the center of Nizhny Novgorod

My hotel was located on the opposite side of Oka river from the historical  center and the main beauties of Nizhny Novgorod. To cross Oka, you can use public transportation or,  as I did, just walk through the Kanavinskiy bridge. Moreover, the length of the bridge is only about 1 km and it offers good views of the connection of Oka and Volga rivers.

After crossing the river, I could go along one of the most picturesque streets of Nizhniy Novgorod – Rozhdestvenskaya. However, the girl at the hotel advised me to climb to one of the town’s viewpoints. So after crossing the bridge I turned to the right and went towards the Blagoveschenskiy monastery, which you will see from the bridge. The monastery itself didn’t strike my attention too much and I decided not to go inside and went further until I saw stairs. So you can get upstairs and enjoy views of the confluence of two rivers and think about something good 🙂 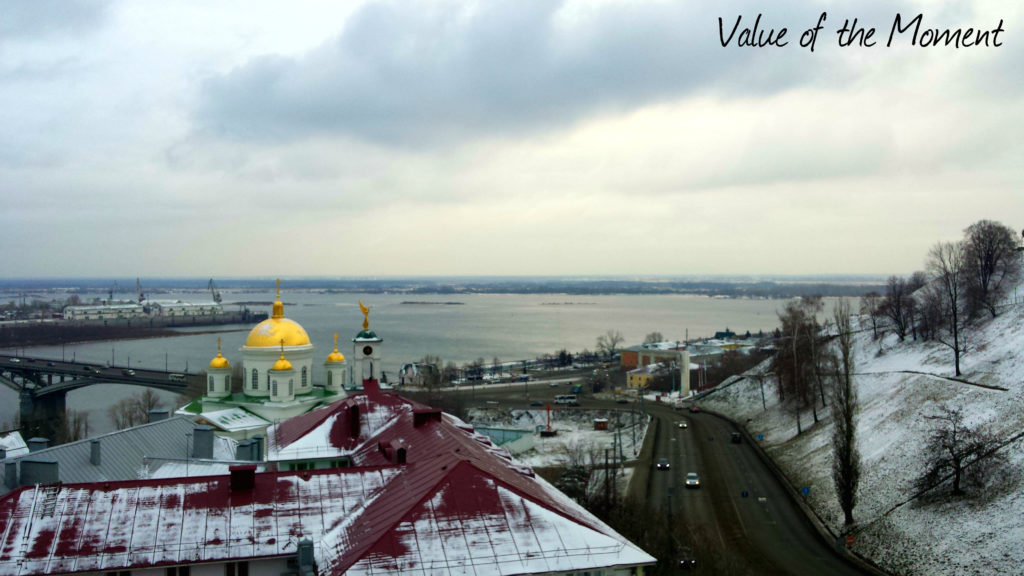 Then my way passed through one of the most famous and beautiful streets of Nizhniy Novgorod – Rozhdestvenskaya street (in English it translates as Christmas street, but nobody will understand you if you tell like this), which ends with a monument to Minin and Pozharsky, and from here it is stone’s throw to the famous Chkalov stairs. The street itself is very nice and clean, as I learned later, it was recently completely renovated. It is full of a variety of cafes, shops, old buildings, however, the pearl of the street is  Rozhdestvenskaya Church (Christmas Church in English). 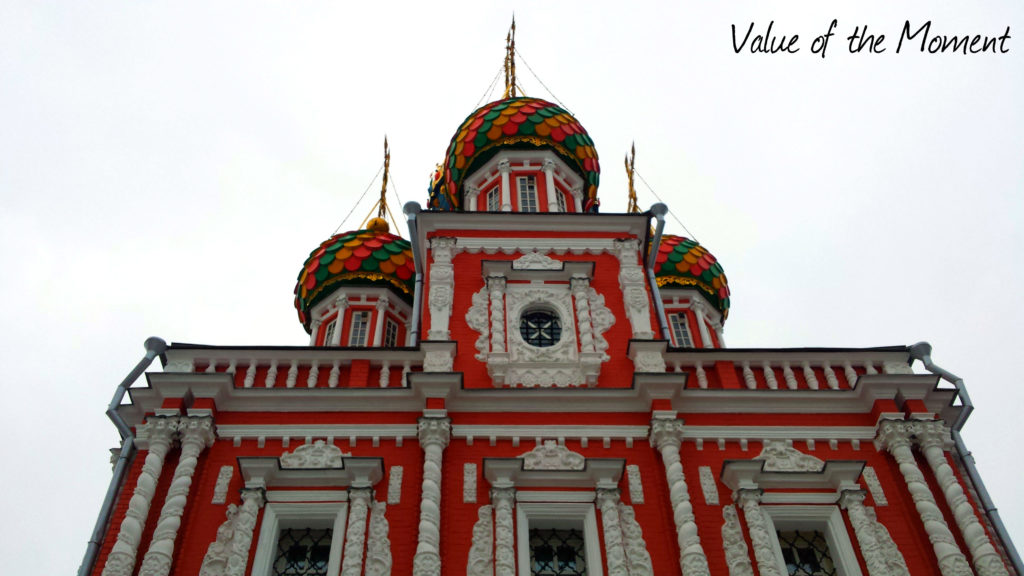 That day, against the background of a grey leaden sky, this amazing and colorful church with colored domes and stunning figure framed facade was particularly beautiful. You know, in such moments, you realize that there is one big advantage of  the autumn and winter times. When the leaves fall from the trees, you can fully enjoy the beauty of the architecture, which is hidden behind the lush crones of the trees in summer time. Church is working and very tinny inside. So after admiring its beauty from the street, I advise you can go inside to pray and to stay a little in silence alone with your thoughts … 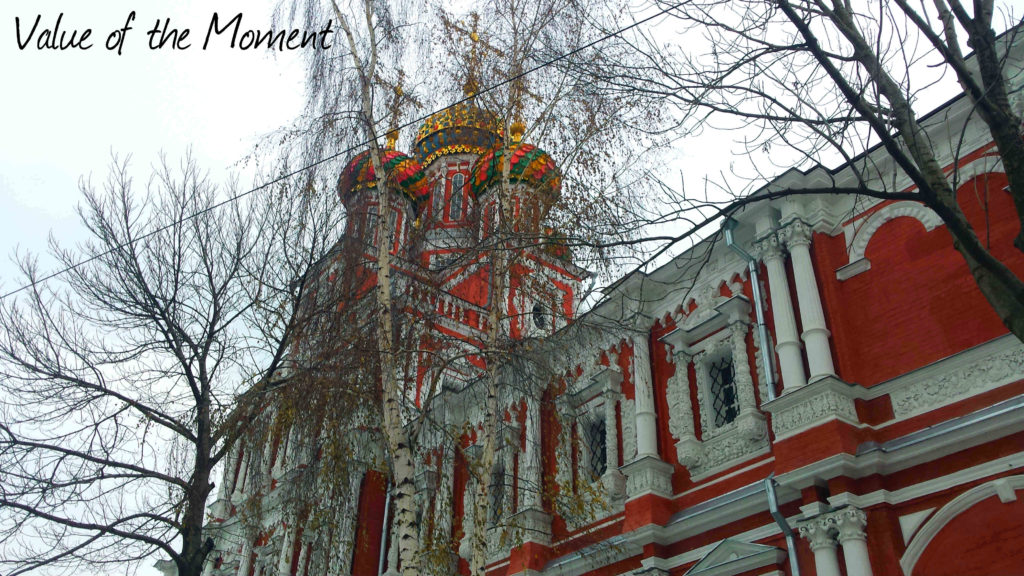 Coming further along Rozhdestvenskaya street, I saw an interesting city attraction – Electric Vitamins 😎 If you touch both hands to the metal plates, the circuit closes and the arrow will move. Couples like to come here for wedding photo shoots. Instruction says that the louder cries “Kiss!” and the stronger kiss of newlyweds, the stronger joined their rings – the stronger the galvanometer needle is deflected 🙂 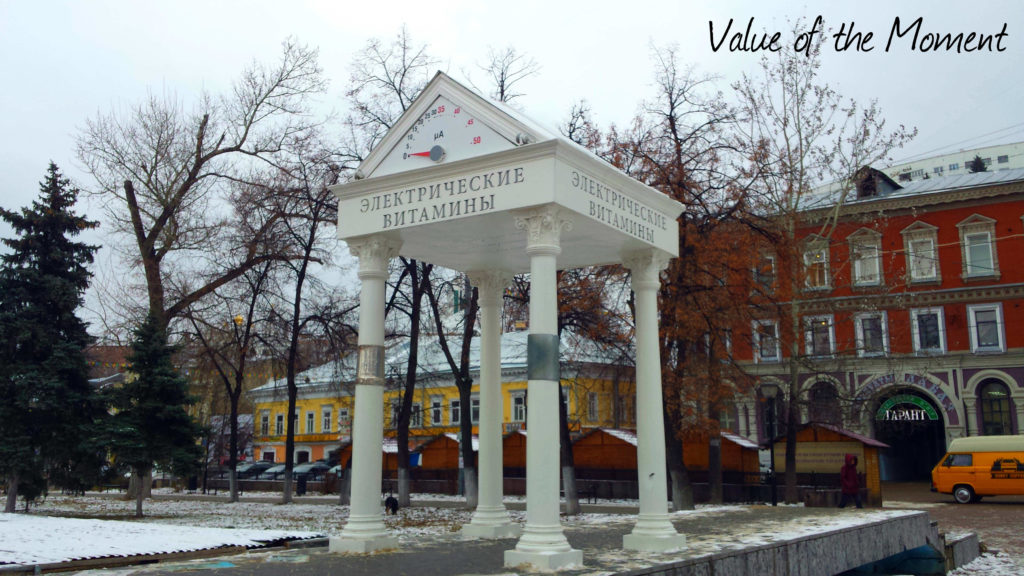 From Electric Vitamins I came very soon to the square with a monument to Minin and Pozharsky. 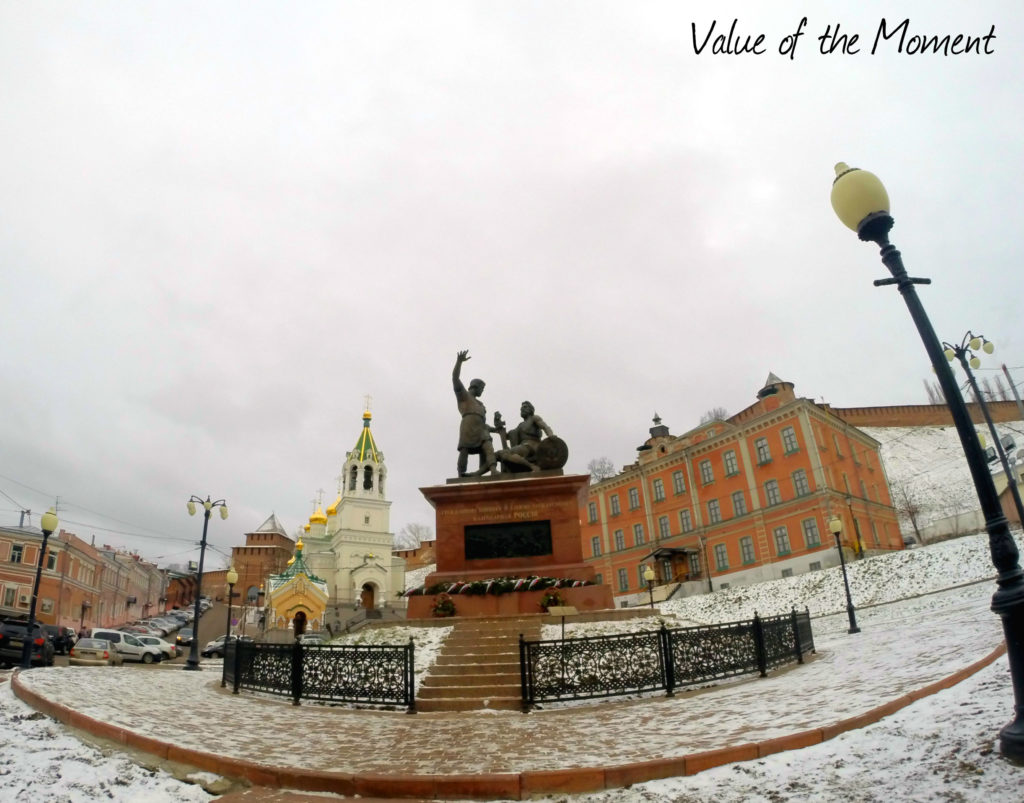 Kuzma Minin and prince Dmitry Mikhailovich Pozharsky were the initiators and leaders of the People’s Militia in the years 1611-1612 during the Polish intervention in troubled times. Their militia has liberated Moscow from the Poles later. Monument in Nizhny Novgorod is a copy of the monument in Moscow, which stands in front of Valiliy Blazhenniy Cathedral (St. Basil’s Cathedral). The place was chosen not by chance, because from this square of Nizhniy Novgorod in 1611 Kuzma Minin began to call upon citizens to gather people’s militia and send it to liberate Moscow. After standing near the monument to honor the memory of national heroes, I went to the embankment and walked in the direction of the famous Chkalov Stairs (summer photo from previous trip). 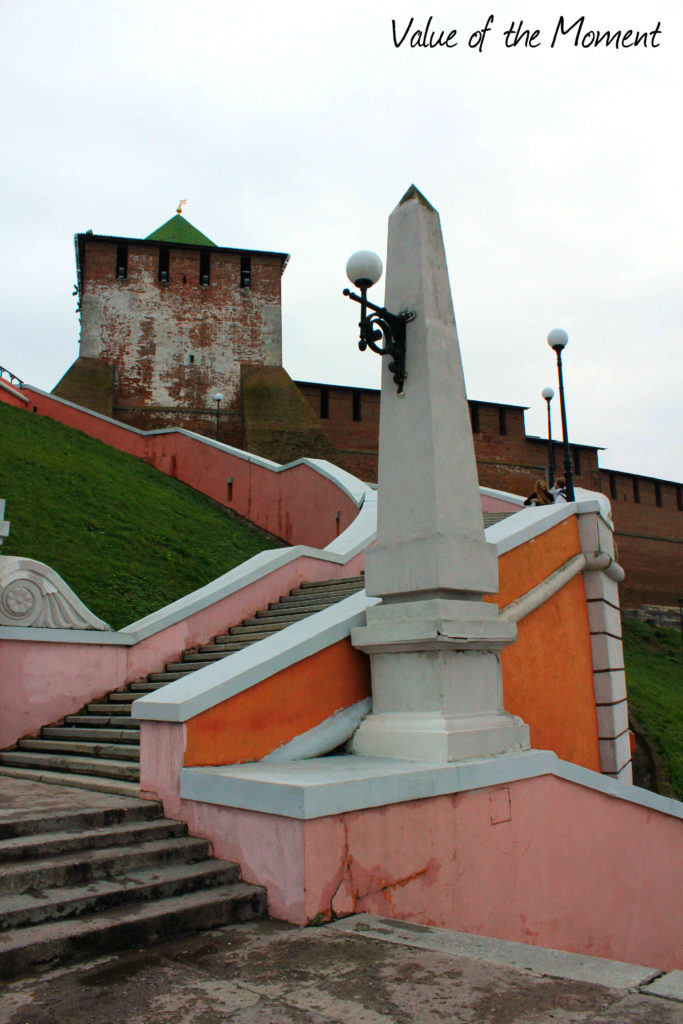 They say that it offers the most beautiful view of the confluence of Oka and Volga Rivers, but to see this view you need to pass through 560 stairs, and I can tell you that it is really worth efforts! The view from here is peaceful and impressive, even though the grey sky and cold wind flowing from the river! 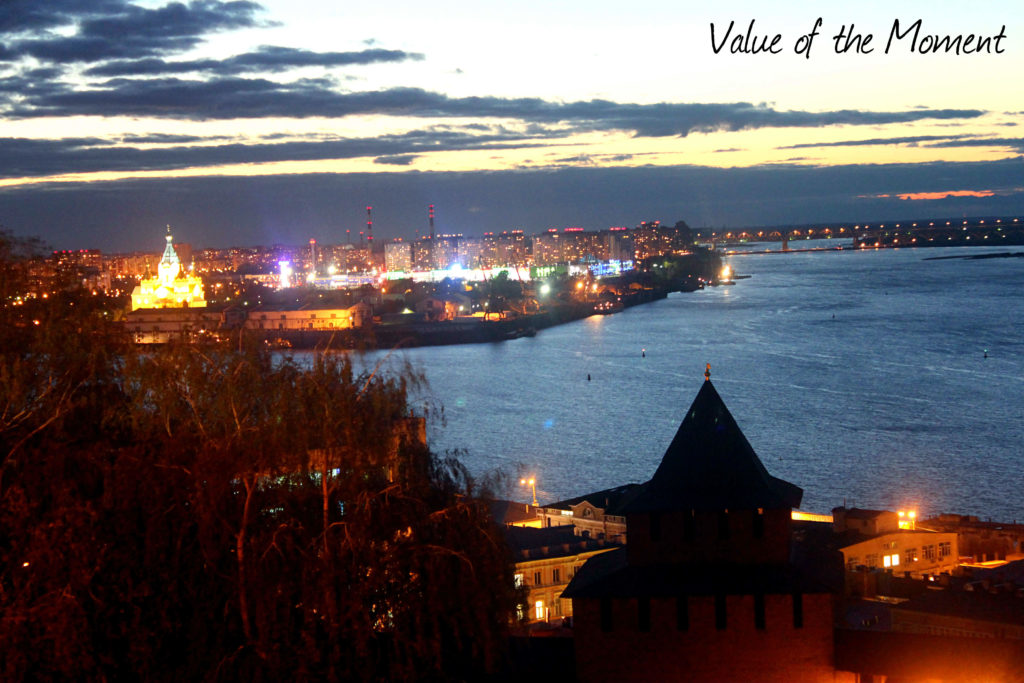 The Kremlin of Nizhniy Novgorod

While walking in Nizhny Novgorod, one of the mandatory things is to visit The Kremlin Of Nizhny Novgorod. By the way, here you can book a tour and the guide will walk with you throughout the Kremlin territory and will present you all historical facts with boring monotone voice, but this option is not for me for sure 😉 I’m not a fan of such tours, even if they are interesting, because the next morning I don’t remember 90% of what I heard about during this tour. 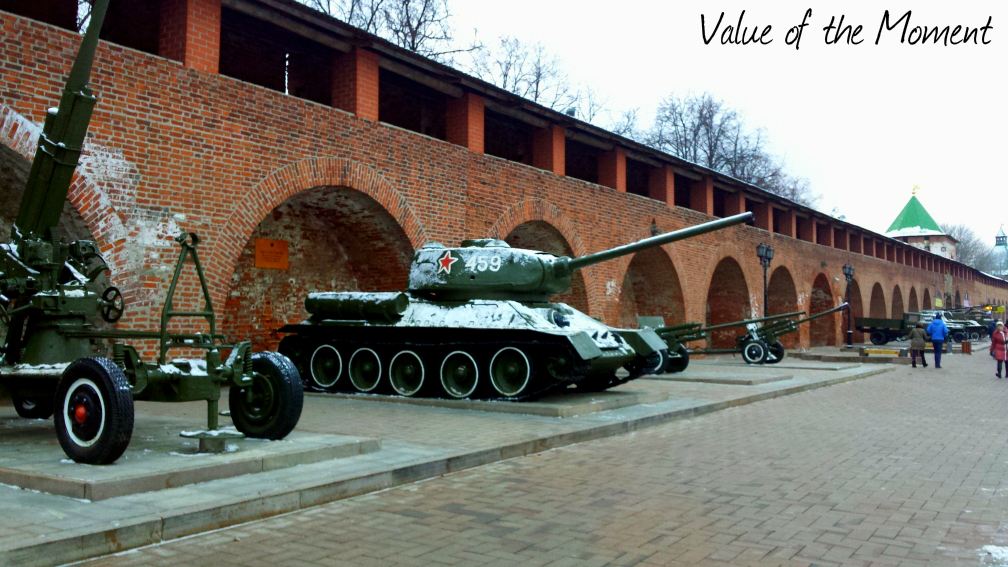 Inside of Nizhniy Novgorod Kremlin

That is why I preferred to walk around, admire Volga river from the observation deck and to see the collection of military equipment since the great Patriotic War (World War II in Soviet Union). I like that during these walks, you can see exactly what you want and make your own opinion from what you’ve seen, and not just to accept the vision of the guide. As for interesting historical facts, I can easily find it in the Internet.

In Kremlin I was really touched by one unique monument – panel “Our Victory”, which consists of 3 sections. In the center is the legendary T-34 tank – a symbol of victory. On the sides of it the fighter La-5 and the volley from “Katusha”. 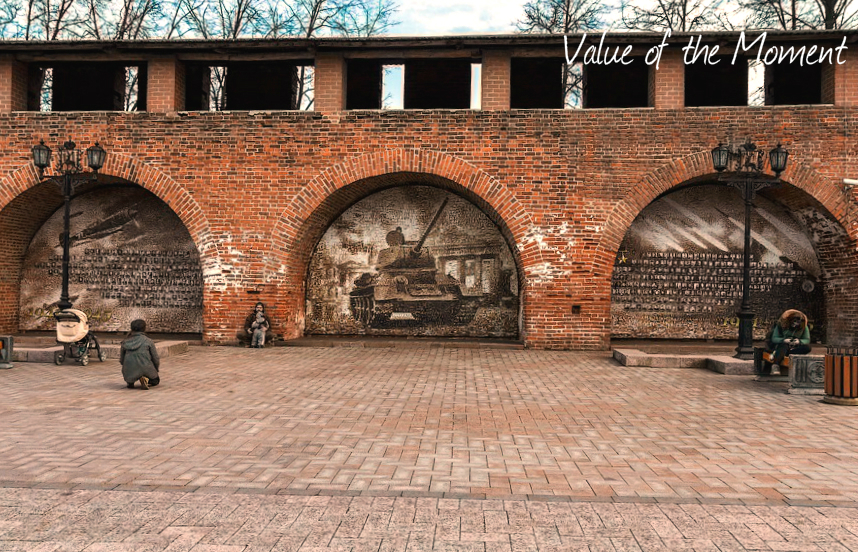 First, you don’t see anything unusual, but when you come closer, you begin to feel the depth and power of this monument. 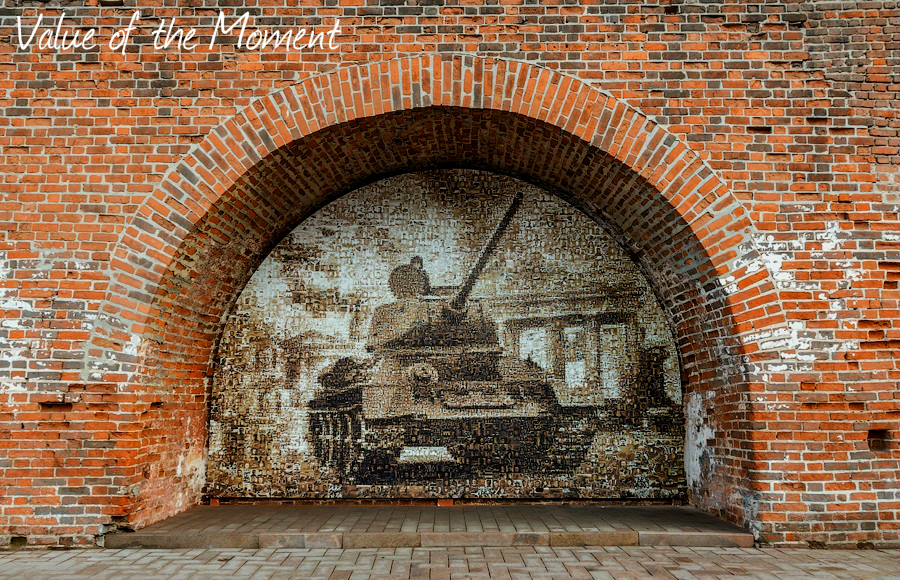 Because the images are made from photos of Gorky (Nizhniy Novgorod was called Gorky before), who defended our country during the great Patriotic War. 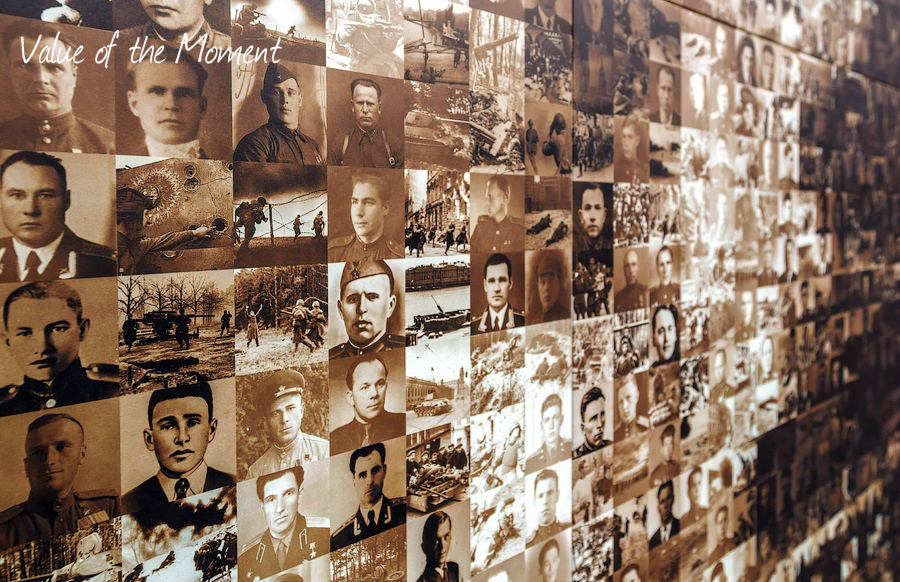 Later in the Internet I read that over 15 000 photos were used to create these panels. These photos were provided by veterans and military archive of the city.

After thanking the heroes for their great deeds, lost in my own thoughts I went in the direction of Bolshaya Pokrovskaya street, which is called  Nizhny Novgorod’s Arbat here. In my opinion this is absolutely the right comparison, because Bolshaya Pokrovskaya street is 100% pedestrian and is quite unusual (like Moscow Arbat, actually). In the evenings people walk here, alone, in pairs or in large groups. In my opinion there is the largest concentration of cafes and restaurants in the city, some of them are very unusual like this one – The Shelter Of Tired Tractor Driver:-) 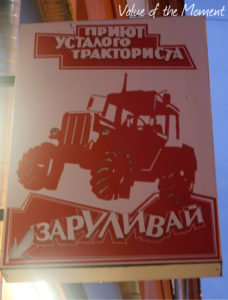 Here there are Souvenir shops, street musicians are playing and so on. Actually, life here does not stop even in winter time. Also in this street there are many different unusual monuments, such as the lady who primp before a date. 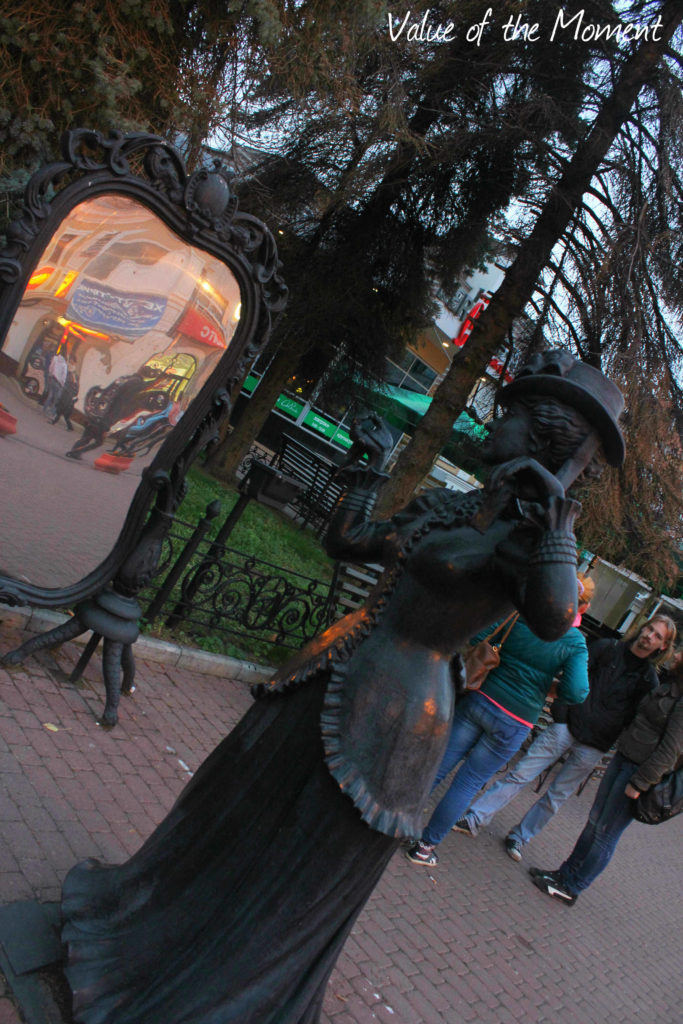 The monument to the cat, who is hunting for pigeons (and you’re can’t immediately understand that it is a monument). 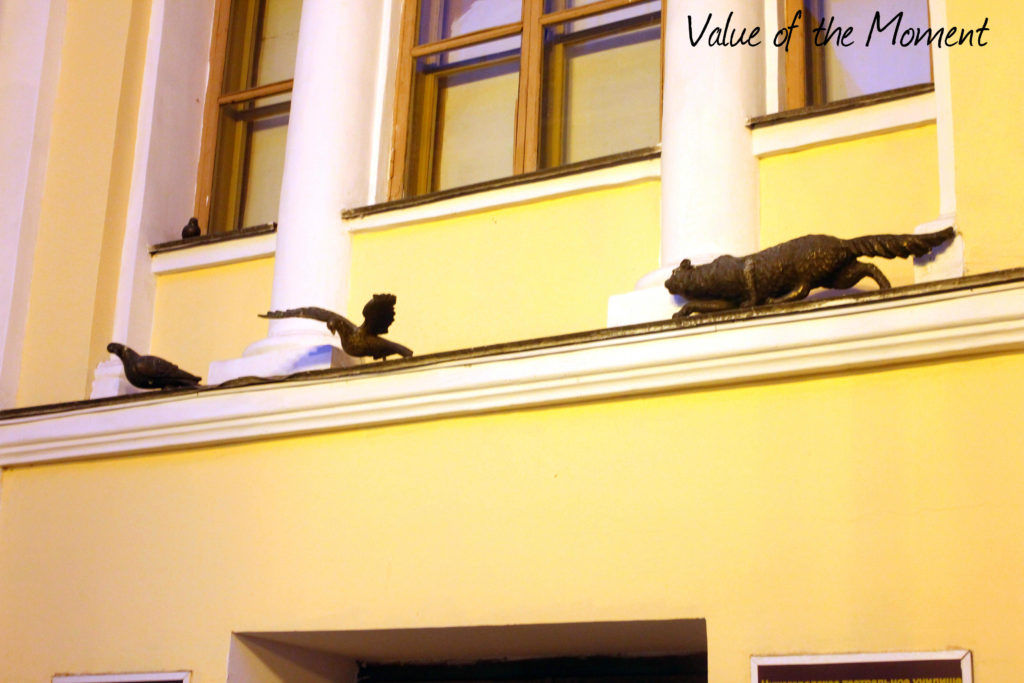 Or just a goat in the middle of the street. And this goat and attracts the most attention! So I could not pass by her side also 🙂 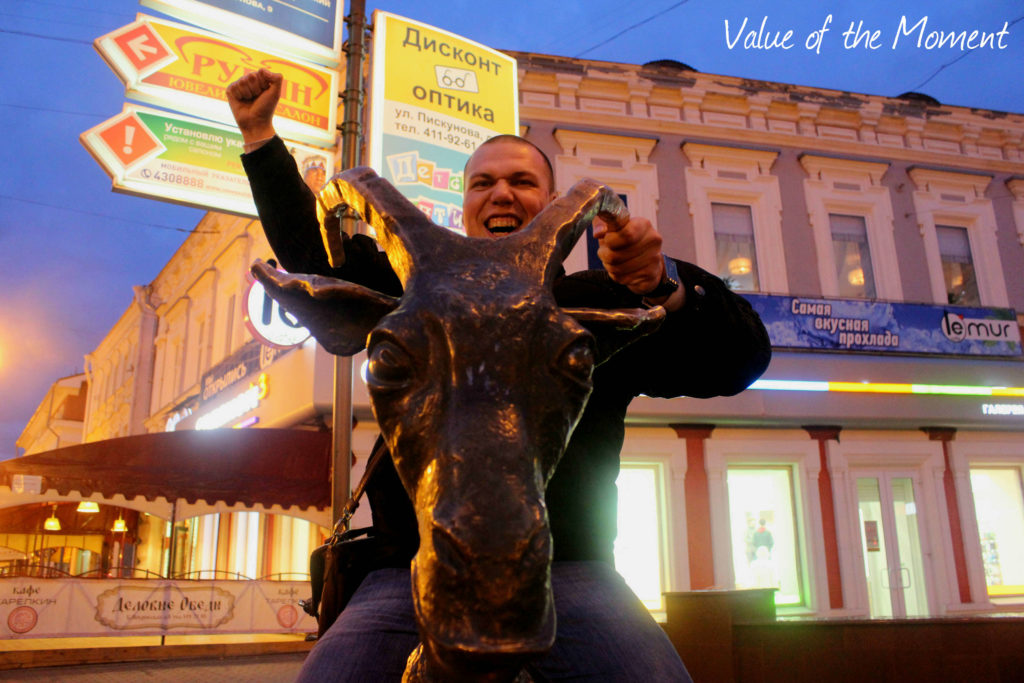 A strange monument of Ad, which declares following: “I will change English childhood (Earl ruins, school Rugby team, London’s Museum of Childhood, the haircut of Elvis) for the childhood spent in Russia (Bicycle “Orlenok”, the school with extra classes, soda, rose cupcake in Chita in 1951).”And the phone number is written also. I wonder what would happen if to call this number? Who will pick up?  🙂 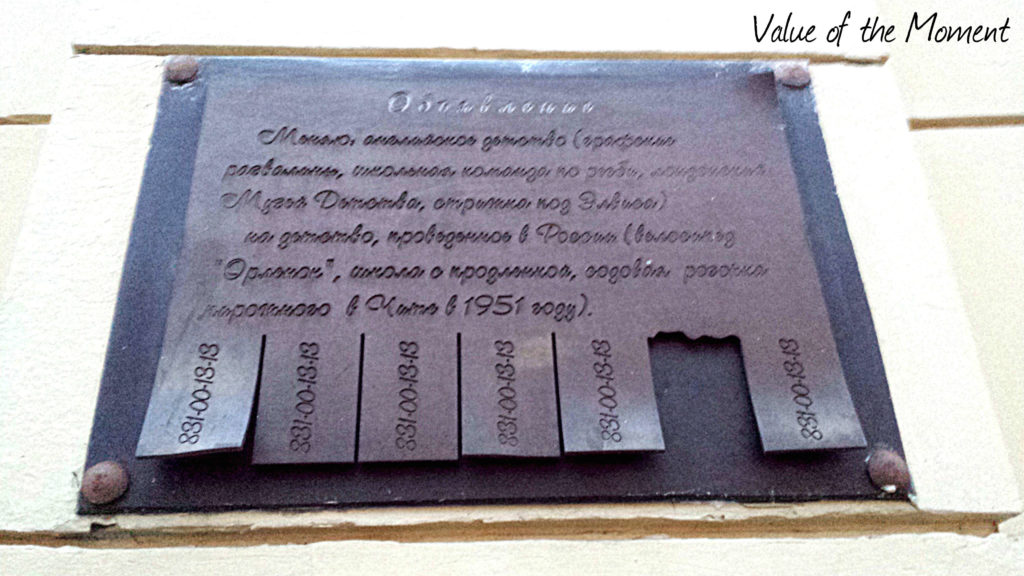 So, Nizhny Novgorod is a very interesting, beautiful, energetic and developed city! How about this interactive timetable at the bus stop? Here is the SOS button, or you can read about the history of the city, to find public transport routes and read the information about all the city’s attractions. And all this is in Russian and English languages. 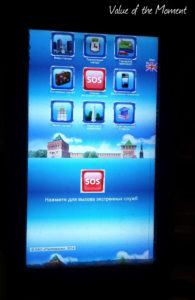 In General, I really like this city. And I will definitely recommend everyone to visit it at least once!