Nature is a host and human is a guest

Kamchatka really can be called The Edge of the Land. It’s an amazing place where people still can not tame the nature, and continues to adopt to its requirements. For example, Kamchatka is a huge region, which still has no road or railway communication with mainland. This is not a remote island somewhere far in the sea, it is peninsula, however, the last ground route is cut off for a few thousand kilometers from the isthmus of the peninsula. So it’s possible to get to Kamchatka only by air and by sea. By the way, that is why in Kamchatka noody steals cars 🙂 The Nature of Kamchatka is full of wild fauna, for example, there are so many bears here, that several times a year they come to the cities, including the region’s capital – Petropavlovsk-Kamchatsky. Unfortunately, sometimes these bear trips are finished tragically for people… There is still no good Internet connection here! Of course, there is a signal anywhere and people have connection in their houses, but to the peninsula it is distributed only by air through the mountains, as no other way to do it there (like roads and Railways). So the Internet is slow, the signal is always unstable and very often breaks. Due to this people don’t spend a lot of time in social networks and more fond of outdoor activities. Kamchatka is the land of 4×4 SUVs 🙂 Due to the complicated landscape and abundance of snow in winter, 80% of the cars here are off-roaders, half of them are additionally lifted with structural changes of the suspension. They say that in winter time sometimes it is impossible to leave the neighbourhood by normal sedan because of snow amount. So the nature is a host of these places, and man is only a guest who needs to adapt.

I was sitting by the window during the flight to Petropavlovsk-Kamchatskiy, and sitting in the plane I have already realised that this is a very unusual and beautiful region. You can see only mountains from the window, and even clouds have a funny shape 🙂 Most likely we are flying near a volcano or very high mountain.

When you get out of the plane, in front of you there is an awesome view of mighty and majestic Koryaksky volcano. I was lucky that the weather was sunny, so view of the volcano was really awesome.

The airport is very small and funny 🙂 When the plane landed, we were not even picked up by bus, we just started to walk to the exit through the runway! There is no Station of arrival either. There is a room where they bring the luggage, and passengers must wait in the street, until they are allowed to get inside for baggage claim. That day I was happy that I have arrived in autumn and not in winter time 🙂 However, all these inconveniences are compensated by stunning unspoiled nature and an abundance of seafood specialties, which I desided to describe in separated article, called Kamchatka is a Paradise for seafood lovers 🙂

On the way to the city you can see a very beautiful monument – two bears with salmon fish in mouth. The inscription says: “Russia begines from here”.

Nature and surfing in Kamchatka

Due to its remoteness from big cities, difficult logistics and the low population, people still couldn’t harm or sell natural treasures of Kamchatka too much, so it’s still unique natural environment here. It is a Paradise for hunters, anglers and outdoor enthusiasts. The forests here are full of mushrooms, berries and animals. Here you can hunt bears, elks, hares, deer, wild boars and others. The ocean and rivers are abounded with fish here – all kinds of salmon: pink salmon, chum salmon, sockeye salmon, coho salmon, saffron cod, chinook salmon, etc. The ocean is full of shellfish and other marine fauna as squids, scallops, and, of course, the famous King Crab. The outdoor enthusiasts and photographers can enjoy mountains, climb volcanoes or to visit the valley of geysers. In spite of the cold ocean water here Kamchatka is quite popular among surfers, but here they need to surf in a special thermosuits 🙂

One day in Kamchatka. A trip to the ocean shore

Unfortunately, I came to Kamchatka for job purposes and had only one day to explore this place. So I was so happy when was invited to go for the whole day to the ocean. Oh, by the way, if you are in Kamchatka and have no friends, then make sure to rent a 4×4 SUV, preferably together with a local guide, because all the most beautiful places are located far from paved roads and you need to get there along by forest paths that are known only by locals. When I talked to them, I told that we don’t have an ocean, but also like to go to the forest by car not far from Moscow. However, when I told that I go there by Skoda Yeti with front-wheel drive and automatic gearbox, guys were laughing 🙂 It turned out that to go to the forest in Moscow and in Kamchatka are two completely different things. Here to go into the forest you need a full wheel drive SUV, preferably with increased ground clearance 🙂 However, I was able to check it next day when we went to the ocean. The photo below is the beginning of a journey and the road is still acceptable even for Skoda Yeti 🙂

But then there were places where even Land Cruiser Prado with four-wheel drive was struggling, and we had to go out of the car to drive further 🙂

When we arrived on the place (stopped at some cliff), I was almost paralized with the beauty I saw. Yes, the sky is grey, yes, the ocean is raging, yes, it is harsh Northern nature… But what a beautiful view! You’re so amazing, Kamchatka!

Winds that blow over the cliff are so strong that make birches to adopt and change their shape.

Going down to the beach is possible only by a powerful military truck, and those who came on a regular car (4×4 Land Cruiser), need to go down to the beach and climb back a fairly steep cliff by foot. To be honest, it is not for wimps 🙂 And also, this place can be called a beach conditionally, so forget for swimming and taking sunbathes here! Ocean’s water here is always cold and never warms up enough to swim. However, there are some brave guys who are doing surfing here, dressed in a special waterproof suits.

A special feature of Kamchatka’s beaches is the black volcanic sand and a huge number of seagulls, which have trampled the whole beach. So I also decided to leave my footprint there 🙂

Footprints of seagulls on the black sand

Some time ago Kamchatka was a place for large-scale military exercises, which have left a lot of garbage as anti-tank fortifications, fake bombs, iron barrels and blown up cars. Unfortunately, our military is not trained to clean up after exercises, so they have left everything as it is. I hope that locals will clean all this garbage and the beach will become clean again.

Walking along the beach you can find a lot of trinkets and souvenirs like shells, or, for example, the skeleton of a starfish.

However, our next trophy was a real shock! This I did not expect to see at all! We have found remains of a whale which was thrown  by storm to a shore. Unfortunately, it’s too far and deserted place that someone could inform rescuers about this whale for them to try to save him. Therefore, the animal died… 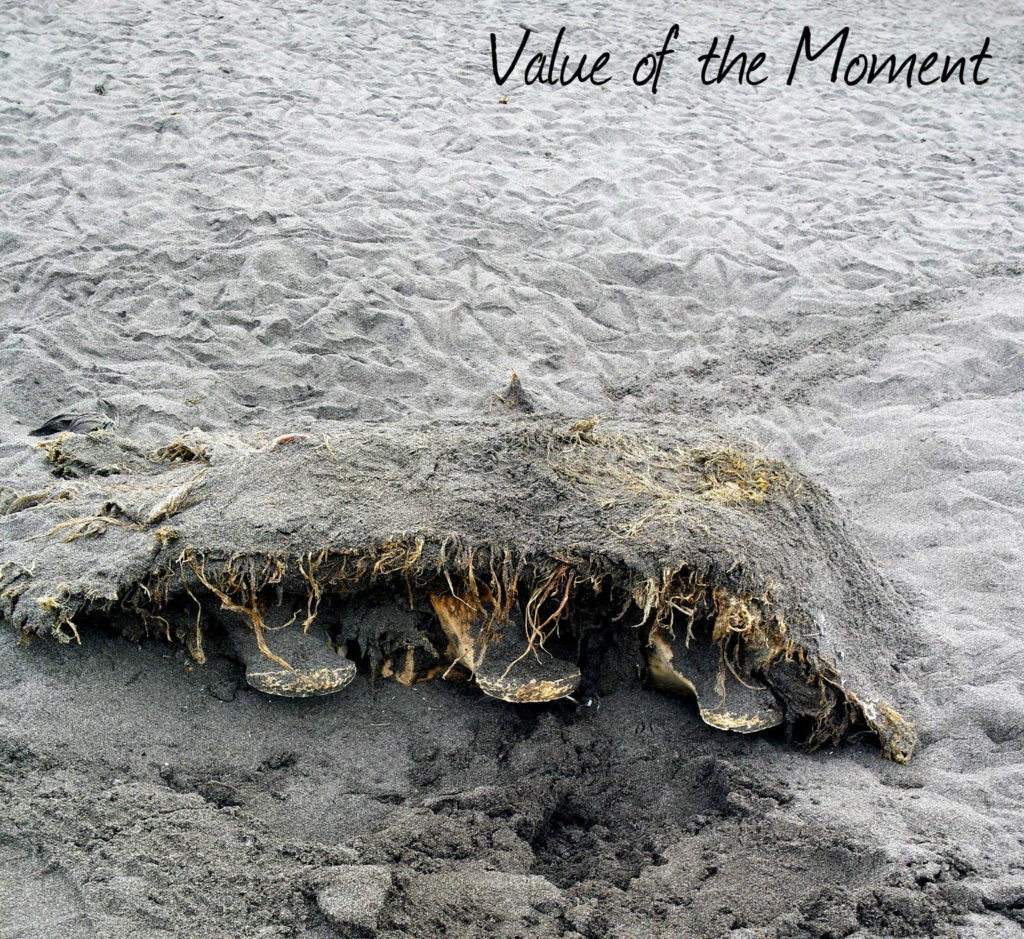 We left the women to collect the rosehip and shiksha (local berry) and decided to climb the second rock on the opposite end of the beach.

An awesome view of the ocean.

Also from this place you can see famous rocks, called Three Brothers, towering over the water at the entrance to Avacha Bay. There is one legend about these brothers:

A long time ago the city, founded in the Avacha Bay, was often hit by huge waves from the ocean – a tsunami, and people could do nothing with this power. So every time they had to escape to the mountains and to wait until tsunami stops. Then they came back and had to restore and rebuild the city, laying in the shore of amazing beautiful bay. And so it was, until citizens decided to build a fence at the entrance to the Bay and started to bring rocks to the sea gate. They worked day and night and almost finished construction, but saw that the water is quickly running out of the Bay. That meant that tsunami is gaining power again and is going to fall upon the city. Women, children and elderlies were sent to the mountains, and men went on to build the dam. But people and horses were already tired and the wave was already approaching, so people started to panic – they rushed to the mountains, because have realized that don’t have time to close the last gap and the dam will be ruined. And only three brave brothers kept staying against the wave, closing the gap with their bodies. Their desire to save the city was so strong that they turned into stones. The dam withstood the wave had gone, and since then, the city didn’t know this disaster anymore. But three stones, Three Brothers, still keep the entrance to the Bay and remind everyone about those distant times.

The third brother also there, he hidden behind the second, so it is not visible in the photo 🙂

On the way back we took the women with berries, collected two huge bags of laminaria along the shore that will be washed up and coocked later and went back to the city.

Kamchatka has charmed me and I really wish I could stay here longer… However, I’ve promised myself to come back here again and explore the beauty of Kamchatka. But until then, see you soon, Kamchatka!